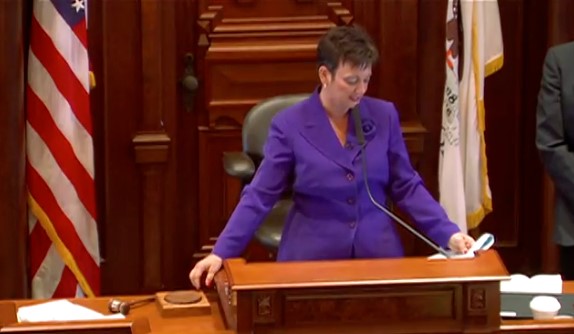 Debbie was busy campaigning and then working as a member of the Senate, so she skipped her annual gynecological exam for a few years. She figured (like many of us do), “No biggie; I’ll just go when I have time.” When she did eventually go and get her Pap, her doctor told her that her results were abnormal. “He just made it seem so bad. You know, it was just sad because then, of course, I couldn’t tell anybody what was going on in my life because I felt ashamed.”

Unfortunately, the stigma surrounding STIs can affect any one of us—even the first female majority leader in the state of Illinois. Even worse is the way that Senator Halvorson’s doctor made her feel as though she’d done something wrong.

She was diagnosed with high-risk HPV, and she was informed that because of her family’s medical history, she was at a higher risk of developing cancer. “The hardest part [was] hearing the words cancer, HPV.” So, at the age of 44, she made the decision to have a hysterectomy, removing her uterus and eliminating her chance of the HPV developing into cervical cancer.

Because of the immediate removal of all of those hormones, she was cast into menopause. “If I had to do it over again, I’m not sure I would have done it the same way. But, that’s why I spend all my time educating other young women and people about this issue.”

After she went through her experience, she filed legislation to make it mandatory that all young girls ages 11-12 be vaccinated against HPV. Remember, this was in 2007, so at the time, the law was pretty controversial. HPV is caused by sex, so there were a lot of people who felt uncomfortable with the idea of young girls being vaccinated for it.

Despite the backlash from some, Halvorson’s fellow legislators understood that HPV causes cancer, but it can be prevented if the vaccine is administered before someone becomes sexually active. The bill was amended to include the following: “The Department of Public Health must provide all students who are entering sixth grade and their parents or legal guardians written information about the link between human papillomavirus (HPV) and cervical, vulvar, vaginal, penile, anal, and oropharyngeal cancers in males and females, as applicable, and the availability of a HPV vaccine so that they may be protected before ever being exposed to the virus.”

Madame Senator didn’t stop at the legislation. She later formed the Cervical Cancer Elimination Task Force. With this group, she worked to promote awareness of cervical cancer and HPV. The group also pushes the importance of prevention and screening. “I find that I don’t care what’s going on around me: I get my yearly exams, I get my mammogram and, even though I’ve had a hysterectomy, you still get pap smears,” she stated.

Halvorson also recognizes that the stigma surrounding the virus has proved to be an obstacle. “If HPV could be gotten through coughing, people would be lined up out their doctor’s doors. If this was a vaccine against breast cancer, they’d be lined up. But unfortunately, HPV is through sexual contact.”

Our girl Debbie gets it. The stigma of sexually transmitted infections is real. STIs are the modern-day scarlet letter. Most people don’t want to talk about HPV, unless it’s behind closed doors.

Except Debbie. Debbie not only left her doors open, but she brought out a megaphone, shouting, “HEY! This is a problem! Have you heard about HPV?” She even shared her personal story to put a spotlight on the very real effects that HPV can have on our lives.

Thanks for Senator Halvorson’s forward-thinking agenda, there’s greater awareness of this health issue. At a time when most people were just learning about HPV, she was brave enough to talk about it and make a positive impact.