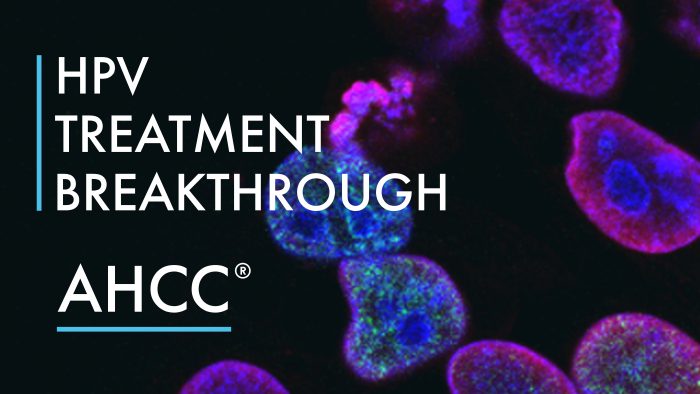 With the recent results of a Phase II AHCC® study demonstrating a 58% effective rate for clearing persistent HPV infections, this breakthrough is life changing and provides serious hope for good health.

If you have HPV, you are at risk for getting cancer, but until recently there has been no cure and there has been no systemic treatment available.  Doctors’ suggestions include nutritional and lifestyle changes for stress reduction to help strengthen the immune system. Survivors of cancers from HPV live in the fear they may come back again.

Most people clear an HPV infection within 2 years with a strong immune system.  The immune system is weakened as a result of age, stress, lack of sleep or a diet lacking in proper nutrients. An HPV infection is considered persistent if it lasts more than 2 years which occurs in approximately 10% of people with HPV.  It becomes more likely cancer cells will form the longer the HPV is active.

High risk HPV infections are the most common to cause cancer. High risk HPV individuals with compromised immune systems are in need of a supplement to build up their immunity and assist in clearing persistent HPV infections. Today’s treatments for HPV are based on early detection when a vaginal PAP smear is done.  This often leads to a cryotherapy treatment, LEEP procedure, surgical excision or cold knife conization.  Even though patients have a good result from these treatments over 80% will have lesions that are recurrent and there are no protocols for treating HPV in the rest of the body.

Although new forms of screenings are being developed they are only done in limited cities. For example there’s a study that done called the Anchor Study that showed that HPV screenings and treatments for cells that are precancerous lowers the incidence of cancer of the anus.

The best case for preventing HPV infections from turning into cancer is the development of improved nutrient dense immunity building supplement such as AHCC®.  This is the basis of the Phase II AHCC® Clinical Study and why it is of such critical importance to millions of individuals.

AHCC@ is a revolutionary, patented ingredient made from the standardized extract from the mycelia of Shiitake mushrooms or cultured lentinula edodes shown to include immune modulatory benefits that are completely unique.

There have been numerous human studies done from well regarded institutions reporting the benefits of AHCC® including modulation of the human immune system, preventing infections which are viral and bacterial, anticancer activity, and enhanced antioxidant effects.

The new AHCC® study was led by Dr. Judith Smith.  The study was a double-blind, randomized, and placebo-controlled with an additional study after that was unblinded.  The University of Texas Health Sciences Center Institutional Review Board reviewed and approved the study.

The goal of the Phase II trial was to prove whether AHCC® has the durability, efficacy and safety to clear high risk HPV infections if taken for 6 months as a supplement. The study was conducted for 12 months and included 50 women aged 30+ with HPV infections which were persistent (lasting two years or more).  There were two groups of patients randomized.

Group one took 3g of AHCC® once a day for 6 months (stomach was empty when taking) and placebo during the following 6 months. Group two was the placebo group. The patients from both groups were tested with DNA and RNA HPV testing every 3 months.  The sample of blood included immune markers for NK natural killer cell levels, INN – interferon‐alpha, IFNβ – interferon‐beta, IFN- interferon‐gamma, IgG1, and T‐lymphocytes.

When taking all 34 women who participated in the clinical study and took 3g of AHCC® daily the  response rate overall was 58.8% cleared persistent infections from HPV.

The Phase II Clinical Study of AHCC® taken at 3g daily on an empty stomach effectively supports the immune system in clearing  persistent infections from HPV with no side effects that were significant.  The recommended duration of supplementation of AHCC® requires further evaluation.

AHCC® is unique and the only HPV supplement that is clinically proven effective, made from medicinal mushrooms.  This has been specifically formulated by top scientists more than 40 years ago because of its medicinal qualities and maximum immunity strength, killer cell activities and benefits.  The scientists were able to reduce its weight and increase its efficacy and absorption.  The manufacturing process is patented and cannot be replicated by any other company in the world other than the Amino Up Corporation in Japan.

AHCC® is a registered trademark of the Amino Up Company