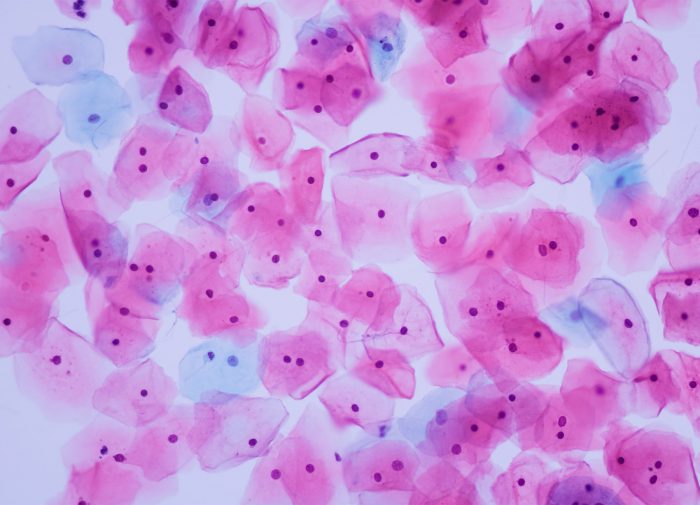 What are epithelial cells?

Epithelial cells are superficial cells found in various parts of the body, including the skin, urinary tract, and respiratory alveoli. The purpose of these cells is to create a barrier that separates the organs from the outer environment. Therefore, epithelial cells protect the organs from foreign pathogens, such as bacteria and viruses.

Specifically, we can find three types of epithelial cells, which are squamous, columnar, and cuboidal. During a pap smear, the pathologist examines the squamous cells collected from the cervix. Besides this area, squamous cells are found in the mouth, esophagus, and vagina.

What Is An Epithelial Cell Abnormality?

When an epithelial cell undergoes genetic mutations that render it abnormal, it could be the start of a cancerous process. In the cervix, doctors refer to this condition as cervical dysplasia.

The gold standard technique to identify epithelial cell abnormalities is a pap smear.

What is the Pap Test?

A pap smear is a relatively old test that dates back to the 1920s, thanks to the work of George Papanicolaou, who worked as a gynecologist.

During his research, Papanicolaou found that some cells collected from the vagina and cervix have different epithelial structures compared to others. The findings were objectified under a microscope. This allowed for the early detection of cancer before even the onset of symptoms.

Today, the pap smear is a routine test used to screen for cervical cancer in sexually active females. It can also serve as a monitoring test to follow up on abnormal lesions.

After a pap smear, the results of an analysis can show one of the following findings:

What is an HPV test?

If you have an abnormal pap smear test, you may need an HPV test. For females above the age of 30 years, an HPV test is standard. As the name implies, the purpose of this test is to screen for the presence of HPV viruses. Note that these viruses cause cervical cancer.

Your doctor may order this test to see which strains of HPV are present. Certain strains of HPV lead to a higher risk of cervical cancer. Additionally, your doctor will set up a tailored management plan that takes into consideration the strain of HPV you’ve contracted.

How frequently should I get a pap smear?

Sexually active females between the ages of 25-69 years old should get a pap smear every three years. If the results show abnormal findings, the pap smear should be repeated in 6 to 12 months.

What needs to be done after an abnormal pap smear?

In case of an abnormal pap smear result, your primary care physician may order a colposcopy. The latter takes a closer look at the cervix using a microscope. In some cases, a cervical biopsy may be necessary to confirm or exclude the diagnosis.

How do we treat abnormal pap smear findings?

Based on the degree of dysplasia you have, your doctor may suggest careful monitoring or treatment.

For the treatment part, it may include taking off the affected cervical tissue. Otherwise, your doctor may use the LEEP technique or conization, which also leads to the removal of the abnormal tissues.

How can I naturally get rid of HPV?
Similar to other diseases, a healthy diet and an active lifestyle help with eradicating HPV. While these lifestyle changes do not directly impact the HPV virus, they optimize the function of your immune system, which takes care of things.

Include foods with antioxidative properties, such as fruits, vegetables, and whole grains.  There are also supplements such as AHCC which is a natural HPV treatment that has had groundbreaking research and AHCC human clinical studiessupporting its benefits to the immune system health.  Also, make sure to get enough sleep and limit your consumption of caffeine, tobacco, and alcohol.