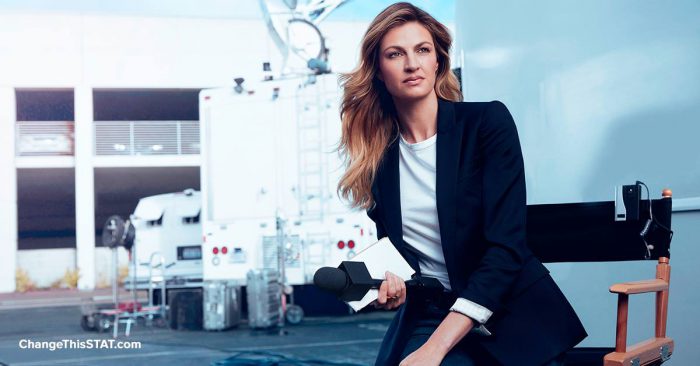 In the fall of 2016, American TV personality Erin Andrews was enjoying a successful career as a sports reporter and host of Dancing with the Stars. As a healthy and active 38-year-old, she never expected to receive a shocking diagnosis of cervical cancer after her annual checkup at the gynecologist.

As she told InStyle, “I made time to do it every single year, and no one in my family had ever dealt with cervical cancer before. I didn’t have any symptoms whatsoever, and I was getting ready for football season. I just went in for a normal exam and thought everything would be good to go. Then, I got a message from my gyno saying that things were not good.”

Because her cancer had been diagnosed early, her treatment options were less aggressive, and she opted for surgical removal. If her cervical cancer had not been detected until its later stages, she may have had to deal with chemotherapy, radiation, or a hysterectomy.

Like many women dealing with a cervical cancer diagnosis, she had her fertility to consider as well. Fortunately, she had already had some of her eggs frozen some a couple years prior, but for many others, that decision can create added stress and even push back treatment.

After her surgery, Andrews assumed she was in the clear. But it was only a matter of days before she heard from the doctor that the margins weren’t clear and that another surgical procedure was necessary. “I was trying to act like it wasn’t going to be stressful, but I was panicked,” she said. She went in for a second surgery and anxiously awaited the news to find out whether it had been a success.

Andrews had kept her cancer battle private, so few knew what she had been through. She carefully scheduled follow-up appointments around her work so no one would be the wiser. “I was in the middle of football season at that point, and I wasn’t about to miss a game,” she explained. Her relentless work schedule didn’t give her much time to take a break for recovery, but she began meditating to help keep stress levels down. She finally heard back from her doctor and was thrilled to hear she was cancer-free.

The effects of Andrews’ cancer diagnosis never really disappeared, however. She still deals with anxiety over a possible relapse, and checkups at the gynecologist are always nerve-racking. However, she’s sure to never miss an appointment, and has become an advocate for regular screenings.

About a year and a half after her diagnosis, Andrews partnered with med-tech firm Hologic for the Change This Stat campaign, which encourages regular co-testing with both a Pap test as well as an HPV test. The hope is that more women can identify cervical cell abnormalities early before they develop into cervical cancer.

Although the number of cervical cancer cases has been reduced dramatically in recent decades, there are still over 12,000 women diagnosed with cervical cancer in the U.S. every year, and around 4,000 women die of this cancer annually. With a combination of regular screenings and HPV vaccination, these rates can be reduced even further.

“Surviving cervical cancer made me recognize how fortunate I am to be in a position to advocate for lifesaving tests,” says Andrews. “I’m asking every woman to join me in making an appointment for their annual exam — and to tell the women they love to do it, too.”