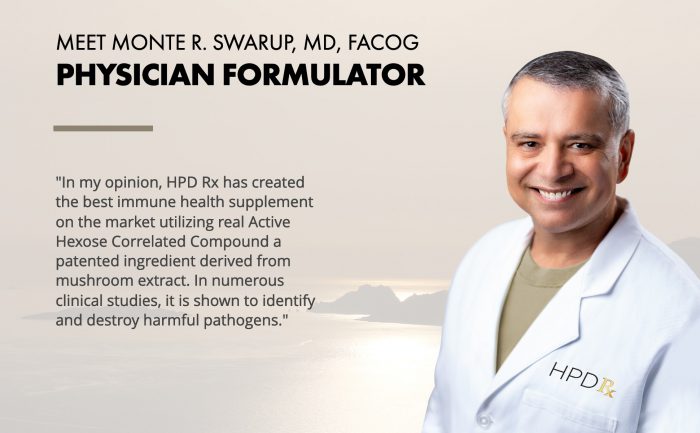 Human Papillomavirus (HPV) is the most common sexually transmitted infection in the U.S., with an estimated 14 million new infections each year. It’s so widespread that over 80% of sexually active men and women will be infected at some point in their lifetime.

But despite how common HPV is, there isn’t a lot of discussion around possible treatments and prevention. The HPV vaccine is most effective if you get it before becoming sexually active, and even then, it only prevents infections of the most severe types of HPV. That leaves one to wonder what happens to those who weren’t able to get the vaccine early enough or who are still concerned about other types of HPV.

Monte R. Swarup, MD, FACOG is one of the country’s top women’s health experts. So, it’s no surprise that he had closely considered how HPV is affecting people today. Because the virus causes more than 9 out of every 10 cases of cervical cancer and can also contribute to cancers of the throat, anus, penis, vulva, and vagina, it’s a very serious health concern, especially for women.

Dr. Swarup realized there was a lack of options for people with HPV and those concerned with their reproductive health. In particular, there weren’t any natural treatment or immune system boosters available to specifically target these health concerns. This realization led to a journey that would take him halfway across the world in search of a solution.

In order to dig deeper into the options for fighting and protecting against HPV, Dr. Swarup researched the best ingredients available. He soon discovered the benefits of a mushroom-derived compound developed in Japan called AHCC or Active Hexose Correlated Compound.

Active Hexose Correlated Compound is made from a proprietary mushroom extract. It comes from the mycelia, or roots, of the medicinal mushroom basidiomycetes, which is known for its immunity-boosting effects, particularly in producing improved T-cell immune responses. Containing a combination of polysaccharides, amino acids, and minerals, Active Hexose Correlated Compound enhances the immune system’s resistance to bacterial and viral infections and helps protect against oxidative stress.

Dr. Swarup isn’t the only one who is onto the incredible potential for Active Hexose Correlated Compound. In fact, it has been studied extensively for its potential to treat cancer and improve liver function. Currently, it’s supported by over 30 human clinical studies, including two pilot studies focused specifically on reproductive health and a phase II human clinical trial. Those studies have found that Active Hexose Correlated Compound helps to protect the integrity of the cervical tissue.

With this information, Dr. Swarup took the next step toward helping men and women protect their reproductive health. He created a quality formulation under the brand HPD Rx called Active Hexose Correlated Compound.  This high-potency, immunity-boosting supplement helps the body naturally respond to HPV.

Dr. Swarup has stated, “In my opinion, HPD Rx has created the best immune health supplement on the market utilizing real Active Hexose Correlated Compound, a patented ingredient derived from mushroom extract. In numerous clinical studies, it is shown to identify and destroy harmful pathogens.”

Dr. Swarup felt more nutrients were needed to build immunity and developed a multivitamin to compliment Active Hexose Correlated Compound call HPD Rx ONE.  HPD Rx ONE is designed as the ultimate multivitamin to strengthen immunity. Deficiencies in vitamin C, vitamin D, zinc, and other nutrients can impair immune function, so it’s packed with vitamins and minerals to help keep your immune system strong. The wide range of nutrients shores up your immune defenses while supporting reproductive health in both women and men, including the health of the cervix and prostate.

Unlike other multivitamins, HPD Rx ONE goes a step further by including key immune-boosting phytonutrients in every dose. These include ECGC, lycopene, and indole-3-carbinol, all of which have been found to help enhance the immune system naturally.

Thousands of satisfied customers have taken this supplement with great success. It’s manufactured in the USA in an FDA-registered facility that adheres to Good Manufacturing Practices (GMP). If you’re one of the millions of people dealing with HPV or looking for ways to prevent it, try the high-potency, physician-formulated multivitamin HPD Rx ONE to boost your immune system naturally.