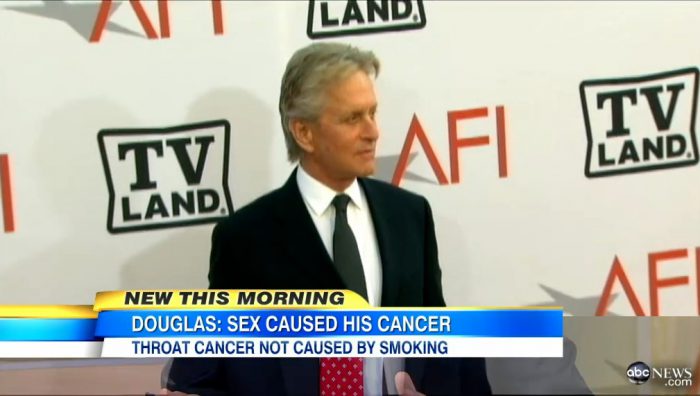 In 2010, actor Michael Douglas went to several doctors in an effort to determine the cause of a persistent sore throat. Eventually, a tumor was discovered on the base of his tongue, and the diagnosis was serious—stage IV squamous cell carcinoma oral cancer.

After undergoing radiation and chemotherapy treatments, Douglas is now cancer-free. During and after his treatment, Douglas has been open about his cancer, which many assumed to be caused by his drinking and smoking habits. However, Douglas claimed that his throat cancer was actually caused by HPV contracted during oral sex.

Many doctors agree that there’s a good chance HPV was linked to the star’s cancer. It’s important to note that heavy drinking and smoking are risk factors for throat cancer, but Douglas’ history may not have come into play in the cancer’s development. Experts are increasingly becoming aware of close link between HPV and throat cancer.

“We are living through an HPV epidemic,” Dr. Dennis Kraus, director of the Center for Head and Neck Oncology at North Shore-LIJ Cancer Institute in Lake Success, N.Y. told HealthDay in 2013. “We used to think of throat and neck cancer as a disease of smokers and drinkers,” he said, but the demographics have changed and it’s increasingly become a sexually contracted disease.”

By sharing his experience, Douglas brought attention to the fact that HPV is an STD that can potentially lead to cancer. He also helped to destigmatize oral sex and HPV since more people are discovering through his story that it’s something nearly everyone is at risk for; Douglas just happened to get a high-risk strain of HPV that caused cancer. Though his health history may have elevated his risk for cancer, it’s unclear whether it played a role in his disease.

Fortunately, there’s some good news about HPV-related throat cancers. As Dr. Marc Siegel, an associate professor of medicine at NYU Langone Medical Center, New York City explained to HealthDay, “It’s much more responsive than any other throat cancer. If the cancer is due to smoking or alcohol, the ballgame is over practically. This is very responsive, which is why I’m not surprised to see that he’s cured,” Siegel said.