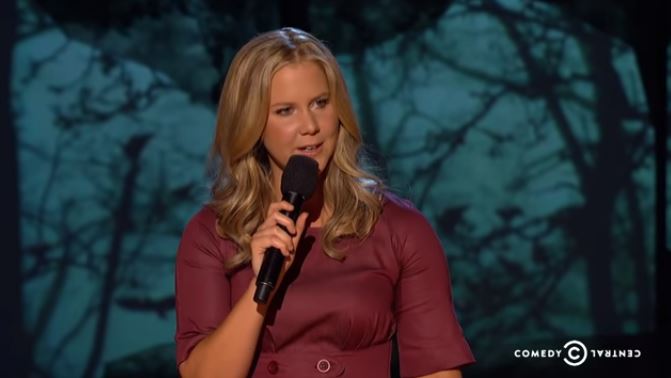 Amy Schumer is a controversial name these days. It seems like everybody has an opinion about her or her comedy. And while neither I—nor she (1)—stand behind some of the things she’s said as her on-stage character, it’s impossible to deny the impact she’s made in advancing society’s perception of what a woman can do, be, or say.

Schumer’s comedy career started to take off when she began appearing on Comedy Central Roasts. It was there that audiences began to get a taste of her trademark, no-holds-barred style of comedy. “There’s always been something in me that’s like, ‘We should be allowed to be honest about this, and we shouldn’t feel bad about it,'”(2) she said in a 2014 interview with Bust. And feel bad about it, she doesn’t. From her 2012 special titled Mostly Sex Stuff to her 2019 Growing, Schumer never holds back from providing her astute observations.

In Mostly Sex Stuff, Amy plays a character whose raunchy take on sex provided a late-night edge that the world had never seen a woman have before. In her early days, she was notorious for dressing in high heels and a dress for her stand-up to draw people in, then she’d hit you with ideas that you’d never expect a traditional lady to say. In the 2012 special, she talks about everything from fisting to HPV. And though a lot of her progressive ideas about sex helped to move forward the sexual revolution, some of her other observations are pretty problematic now. As she put it in this 2019 interview “‘I played a Republican fool, kind of racist, homophobic, everything…I think people may have been laughing for the wrong reasons.'”(1)

Regardless of how Schumer’s comedy looks in hindsight, there’s no denying the impact it made. In her interview with Bust, she explained the goals behind her stand-up. “I want to make people feel better…When I was starting out in stand-up, a lot of [my friends] had terminated pregnancies, but it was still a thing they felt really ashamed of. And HPV, that was another thing—I got HPV in college, and I was like, ‘My life is over.’ I was so ashamed. And then after college, my friends and I were out for drinks and they were like, ‘Oh my God, I had it too.’ We had all gotten it, but everyone had this bad moment. So when I go to a college, especially, I’ll be like, ‘You’re all going to get it, and don’t feel bad.'”(2)

After her 2012 special, she went on to create a series called Inside Amy Schumer (get it?). In it, she draws attention to lopsided gender norms by exaggerating them. In one episode featuring a parody of 12 Angry Men, she even goes so far as to have a whole jury confer to decide whether she’s attractive or not. In her Bust interview, when asked about her comedy shining a light on women’s issues by sneaking in truths without her audience realizing it, she said, “That’s the secret goal…Some of my stuff is just stupid, quick things I thought of that made me laugh. And then some of it is stuff I want to call attention to, that I think isn’t fair.”

Amy Schumer has done a lot to normalize sex for women, and she’s continuing to normalize sex with age. In her most recent 2019 stand-up special, Growing, Schumer is married and pregnant with her first child. The discrepancy between the character she played in 2012 and Amy being herself in 2019 is obvious, but even though she might not be talking about one night stands with candor, she still continues to destigmatize taboo topics.

She speaks about her husband’s autism diagnosis, stating, “Once he was diagnosed, it dawned on me how funny it was because all of the characteristics that make it clear that he’s on the spectrum are all of the reasons that I fell madly in love with him.” (3) She talks about her and her husband’s sex life, and she continues to poke fun at gender inequalities. She even normalizes hyperemesis (a condition she suffered from during her pregnancy), saying, “I have this disease…There’s no research on it because men don’t get it.” (1)

Amy Schumer revolutionized comedy, she normalized sex for women, she shined a light on gender inequalities, and she continues to destigmatize behaviors. And while some of the jokes she’s made in the past are inexcusable, there’s no denying that her comedy challenged the traditional role of women. She and her comedy helped pave a way for women to be, say, and do what they want without fear of being shamed or ridiculed.